On July 9, 2014, M695 posted a thread on /tg/ with MechAnon's CYOA, a listing of factions, and a set of adventures featuring the invasion of Tumblr Suits. These adventures were run as pick up games filled with chaos, death, and power armor.

Surprise! Let's see how well you sons of bitches do at playing a CYOA...TOGETHER. That's right, motherfuckers, ain't no lone-wolf horseshit anymore.

Present day. You know the drill. You're at your computer, fapping and drinking a sludge that slightly resembles mountain dew mixed with nacho cheese dust. Or maybe you aren't. But what matters is the fact that your ass is sat down, sitting on /tg/ being generally.../tg/y.

However, as you browse, you come upon some stupid thread with some piece of shit that's posting in all caps. People keep replying with the Ron Paul "it's happening" image, and you reckon that you're bored enough to investigate some shitposting today.

The post, frenzied in writing and written in all caps (presumably with shift from the excessive amount of exclamation marks and < marks), details some stupid warning about Tumblr users getting power suits across the globe. That's stupid. Stupid shitposters. If it was true, you'd assume that it would be on the news or maybe-

A loud bang echoes through the room, no doubt from somewhere outside. Hesitantly, you turn around. Nothing seems out of place. You look back at the thread. People are still replying with Ron Paul. It's gotta be just a coincidence, right? Right.

You assure yourself. There's no way! The warning is already stupid in it's construction. "Tumblr users get suits?" What? Did they ask nicely? Did the gods above decide that Tumblr users specifically needed them? Stupid, stupid, stupi-

Another loud bang. Far off rumbling and low pops. Sirens. It's odd, for certain. But it couldn't be serious. Really. Surely...

To assure yourself, you fire up the news website of your choice. As expected, the news is normal and-

Oh god. The headline stares you dead in the eyes.

What...the fuck? This couldn't be serious. A blanket of dread covers you on all sides. Your chest feels heavy. You feel your heart beat like a piston.

You hesitate for a second, before checking back on the thread. The Ron Paul images cease. Only one new post hits the thread, and your attention, for a split-second, is completely engrossed in its simplistic yet undeniably urgent format.

No image. Just the words "THIS GUY IS NOT JOKING! SOMETHING JUST CRASHED OUTSIDE MY HOUSE, I'M GOING TO GO TAKE PICS. GUYS, SERIOUSLY, THIS ISN'T FAKE. THIS IS FUCKING SERIOUS. I'LL BE BACK WITH PICS OF THE THING OUTSIDE SOON.

STAY IN THIS THREAD AND KEEP COMMUNICATING!!!!"

As if things couldn't get worse, your attention is again diverted, but this time by your windows and walls nearly detonating behind you. You are flung forward, into your computer, and into the wall in front of you. As you struggle to your feet, you see it.

Some kind of... pod. Right outside. You look back at the computer, grimacing and haphazardly wiping your sweaty forehead with your arm. The computer is smashed. Completely, utterly destroyed. The sweat on your head is really bugging you, and you catch a glance of your forearm, now caked in blood. You aren't sweating.

The pain hits you fairly fast, and you realize that if you could have fractured anything on the wall in front of you, you absolutely did. You struggle to get up, before hearing louder pops and thundering blasts. You see smoke in the distance, but no more than a mile away.

The sounds grow in intensity, but this isn't the time to give up. Using all the strength you have, you stumble and fall, eventually crawling to the strange pod, still smoking. What was this thing? Where did it come from? As your vision begins to fade, a blue light scans your broken, bloodied body. A metallic, electronic voice speaks out, and you catch some of its words.

Your vision fades, and you find your mind shutting down.

"The Tumblrfolk have power armors and technology that's seemingly beyond what we understand. The current theory is that they got 300 points instead of 200, we're not 100% sure, but they're powerful as fuck. So we're putting together makeshift squadrons to deal with the problem.

"I know that you've probably not been eye-to-eye with your fellow chanmates, but you've got to put your differences aside for now. Your objective will show on your HUD soon, and you'll be connected with your squadron in a few minutes.

"I have faith in you, friendo, good luck out there."

Sorry for a ton of writing and shit. I threw this together after the idea struck me while rereading the Power Armor CYOA. The organizations listed are NOT in play (currently, at least), but I provided the whole thing for anyone that doesn't have the entire set (and it gave me an extra space to write more).

Good luck, guys! You'll need to work together (or at least, you should) if you want to complete objectives. I have (some) faith in you guys.

Not much is known about this mission, aside from the fact it warranted a discovery of Tumblr Armor possessing extended combat capabilities. Saharan Cross pilots are the only pilots to wear Desert Camouflage fatigues on-base. Saharan Cross was the first operation to ever be performed by the organized Armor Corps.

Editor's note: Please include your power armor on the Pilots page as appropriate, or link to pre-existing pages where applicable!

Clusterfuck of people don’t know rules. Mission to assault an oil platform in the Gulf of Mexico. AO-5 nanites were found along with a woman covered in AO-Base (aka River Tam). 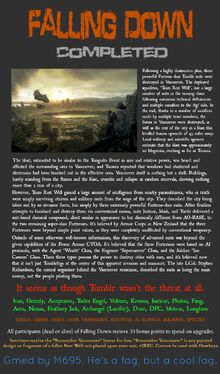 Editor's note: Please include your power armor on the Pilots page as appropriate, or link to pre-existing pages where applicable!

El Blanco causes a black hole, Jack gets multiple people killed, torture ensues with Hydra, suits sacrifice themselves to remove Vancouver and everything in it from the map. First incident where sludge is shown to be highly radioactive/explosive. 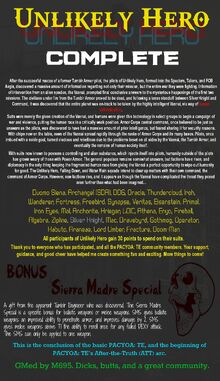 Dubbed "Team Aegis", these pilots are to hold their first operation sometime next week (at some point between Monday June 14 and Wednesday June 16). Their goal is to operate in Ashford, Kent and to save as many lives as possible, as opposed to taking them.

Suits on this list have not appeared for some time. If they become active again, they may move their names back up to the Active list.

Discovered a TA reject, Silver Knight delivered a speech that lead pilots to revolt against commander. 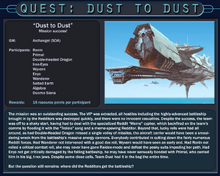 Three side adventures have been held by volunteer GMs. In all cases, players were rewarded with 15 points as opposed to the standard 30 points for adventure completion. Additionally, M695 has also run side adventures purely for RP and story progression with no rewards.

Get Back to Le Roddit

Gods Will be Watching (Sunblaze's cont.)

The second arc of the Teamwork Edition storyline. This arc deals with the pilots, now split into a majority of interesting and different factions, dealing with the Vannai threat once and for all. 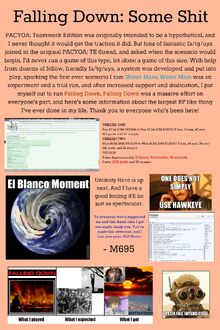 (Basic actions (moving, communicating, observation) will all be success only, so basic actions will happen successfully almost always. There will be three major categories for non-basic actions, DEXY, COMBAT, and TECH. You can only perform ONE TYPE OF ADVANCED ACTION per turn.

Dexy refers to any dexterity or mobility related advanced action (such as dodging attacks, surviving falls, making blocks, or melee combat). With Dexy, the idea is to get the lowest possible number. Roll 1d100 to determine success for an action (being above or below specific number will determine if you succeed or fail). Depending on certain factors (Speed/Dex/some upgrades or circumstances) the number you need to be below may change.

Combat refers to any form of ranged or otherwise non-melee combatative action. Accuracy with weapons, weapon damage, critical hits, luck in wounding enemies, and strength rolls. With Combat, the idea is to get the highest possible number. Roll 1d100 to determine success for an action (being above or below specific number will determine if you succeed or fail). Depending on certain factors (Strength/Power, some upgrades or circumstances) the number you need to be above may change (Side Note: BRUTE FORCE melee combat, IE crushing a suit while you are holding it, is actually determined by the COMBAT system.)

Finally, Tech regards anything either not mentioned above or observation, extreme precision, or investigation. Things such as Perceive and Inspect fall in the Tech system, as well as as suit maintenance or hacking. For Tech, the number you roll must be between a certain amount in distance from the specific number. Easy tech rolls have a large margin (if the number is 50, you must roll between 20 and 80, which is 30 away on both sides) while hard tech rolls have a narrow margin (the the number is 50, you must roll between 40 and 60).

For dexy: Easy/Very Easy is general movement across a battlefield. Medium is basic dodging or common melee attacks. Hard is dodging difficult things or performing specialized melee attacks, as well as special movement functions (backflipping onto a building). Very hard is unique.

For combat: Easy/Very Easy is simply firing a weapon or throwing ordinance. Medium is aiming to hit an enemy when shooting. Hard is long-distance/moving targets or specialized weapons. Very hard is unique.

When you post a roll BE CERTAIN TO SPECIFY WHAT YOU ARE ROLLING FOR. If it is not clear what is being rolled for, the roll and action may very well be ignored. Rolling for basic actions is not restricted, but if you do roll, it will commonly be ignored. 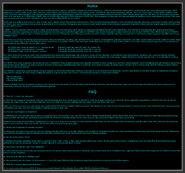 Rules
Add a photo to this gallery
Retrieved from "https://the-power-armor-cyoa.fandom.com/wiki/PACYOA_Teamwork_Edition?oldid=13148"
Community content is available under CC-BY-SA unless otherwise noted.